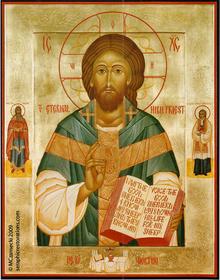 We believe in One Eternal God in Three Persons, the Holy Trinity, Father, Son, and Holy Spirit.

We believe and confess Jesus Christ, fully God and fully Man,  one and the same Christ, Son, Lord, Only-begotten, recognized in two natures, without confusion, without change, without division, without separation; the distinction of natures being in no way annulled by the union, but rather the characteristics of each nature being preserved and coming together to form one person and subsistence, not as parted or separated into two persons, but one and the same Son and Only-begotten God the Word, Lord Jesus Christ, to be the Way, the Truth, and the Life: no one comes to the Father but by Him. There is no other way to God or salvation except in and through Jesus Christ. He is the only Truth about God and the only true knowledge of God is in him. In him is life and there is life in no other. He gives eternal life to those who believe on him and repent of their sins, accepting him as Lord and God.

We believe the Bible is the inerrant, infallible revealed and inspired word of God to mankind. The Bible is made up of the 66 canonical books of the Old and New Testaments and it contains all things necessary for salvation, and to be the final authority and unchangeable standard for Christian faith and life. While there are some additional books that we recognize, called the Deutero-canonical books, they are not inspired on the same level as the Canonical books and are only used for spiritual growth and devotion, but not doctrine.

We believe Baptism and the Supper of the Lord to be the only two Sacraments specifically ordained by Christ Himself in the Gospels that are required of all Christians. We recognize that there are 5 minor sacraments that are not required for all Believers. These are marriage, holy orders, confession, confirmation, and anointing of the sick.

We believe the Third Person of the Holy Trinity, the Holy Spirit does all things in order and is active in today's church. We believe Christians have spiritual gifts through which the Holy Spirit operates and does so in an orderly manner. Members may utilize the gifts the Holy Spirit has given them in a manner consistent with Scripture and proper order, such as anointing the sick with oil and laying hands upon them, and divinely motivated utterances, and etc.

We believe the godly historic Episcopate as an inherent part of the apostolic faith and practice, and therefore as integral to the fullness and unity of the Body of Christ.

We believe as proved by most certain warrants of Holy Scripture the historic faith of the undivided church as declared in the three Catholic Creeds: the Apostles', the Nicene, and the Athanasian.

We believe concerning the seven Councils of the undivided Church thus: we adhere to the teaching of the first four Councils and the Christological clarifications of the fifth, sixth and seventh Councils.

We receive the Thirty-Nine Articles of Religion of 1571, properly historically understood, as expressing the Emmanuel Communion response to certain doctrinal issues controverted at that time, and as expressing the fundamental principles of authentic Christian belief.

We are fundamentally Nicene orthodox in our expression of faith both globally and historically. We have continued to be biblically-faithful to the faith that was once given to the Saints and being part of the “One Holy Catholic and Apostolic Church”.